The Weight & The Reward of Integrity

We pushed the heavy cart to the truck and lifted each length of lumber over the tailgate. We counted as we loaded the building supplies, comparing it to the order we had placed days ago. An order where everything had gone wrong—delays, items out of stock, and hours waiting on hold to get things resolved. It had been a frustrating experience.

Then we noticed something. Four boxes we hadn’t paid for. The store had closed as we pushed our cart out, so we couldn’t return them right away. As we loaded them in the truck to return another day, sneaking thoughts crept in. We could keep them. It wasn’t our mistake after all. The store can write off the loss easily enough. Didn’t we deserve recompense for all the hours on hold with customer service? Our sense of personal injury was battling with our integrity.

Integrity is doing the right thing even when it’s hard or feels unfair. It’s telling the truth even when it’s embarrassing. It’s refusing to construe events to work in our favor.

Back in the early days of the church, we see a husband and wife who put integrity aside for their own gain. It all started with a good thing. Read the story in Acts 4:34-5:8.

“… all who were owners of land or houses would sell them and bring the proceeds of the sales and lay them at the apostles’ feet, and they would be distributed to each as any had need.”

No doubt this was widely praised across the community.  Surely others wished for the same praise.

“But a man named Ananias, with his wife Sapphira, sold a piece of property and kept back some of the price for himself, with his wife’s full knowledge, and bringing a portion of it, he laid it at the apostles’ feet.”

It doesn’t say specifically here what Ananias did wrong, but it is implied that Ananias tried to appear as if he was donating the full proceeds of the sale.  Ananias and Sapphira wanted to look as generous as the others. I can see their private conversation, validating their actions.  Didn’t they sell their property too, losing all future revenue?  Wasn’t it most of the money? Who will it hurt, anyway?

Integrity is “refusing to construe events to work in our favor.”

Their deception doesn’t fool Peter. Filled with the Holy Spirit, he knows that Ananias is trying to lie—not just to the apostles, but to the Holy Spirit.  Peter validates Ananias’ right to do what he wanted with his money, saying, “While it remained unsold, didn’t [the land] remain under your command? And after it was sold, was it not under your control?”

The problem was not the amount of the donation, the problem was that Ananias had tried to lie to God. When Ananias hears Peter’s sharp rebuke, he drops dead.

Sapphira arrives a few hours later, oblivious to what has happened. Peter gives her a chance to show integrity, to be honest even at the cost of causing herself and her husband embarrassment. He asks her plainly, “’Tell me whether you sold the land for such and such a price?’ And she said, ‘Yes that was the price.’” With this lie barely past her lips, she dies just like her husband.

Related: Why Is Integrity Important in the Life of a Christian?

This story is pretty extreme. Very likely, if my husband and I didn’t return the extra boxes, we wouldn’t drop dead. However, when we start to bend our integrity, it loses its shape until we can’t tell what’s right and wrong anymore.

The Value of Integrity

We know that the Lord values our integrity. Read Psalm 15. Here is the first part:

“Oh Lord, who may abide in Your tent?

Who may dwell on Your holy hill?

He who walks with integrity and works righteousness,

And speaks truth in his heart.”

The second part of this Psalm reminds me of a woman of integrity we see in the Bible. I’ll change the pronouns to feminine and then we’ll look at her story.

“She does not slander with her tongue,

But who honors those who fear the Lord;

She swears to her own hurt and does not change . . .

She who does these things will never be shaken.”

“Integrity is doing the right thing even when it’s hard or feels unfair.”

Hannah: A Woman of Integrity

You can read the story of Hannah in 1 Samuel 1 and 2, but I will summarize it for you here. There is a man named Elkanah who has two wives, Hannah and Peninnah. Peninnah has sons and daughters and Hannah has none. When it is time to sacrifice to the Lord, Elkanah gives portions to Peninnah and all her children, but he would give Hannah a double portion, for he loved her.

Anyone can see that this home-life is less than ideal. Peninnah has all the children but envies Hannah’s place as the woman Elkanah loves. Peninnah sees Hannah as her rival and “would provoke her bitterly to irritate her, because the Lord had closed her womb.” I see two hurting women in this story, but only one uses her pain to be cruel.

This isn’t the first marriage in the Bible where the women are rivals, but it is the first where the provoking is one-sided. Sarah and Hagar had some real dust-ups. Rachel and Leah had a full-fledged competition going on. We might say that Peninnah deserves to be shamed for her meanness, but we don’t see Hannah repay evil with evil.

Hannah takes her problems to God. She prays for a son, weeping bitterly. She vows that if the Lord will give her a son that she will dedicate him to the Lord all the days of his life. Eli the priest misunderstands her actions and accuses her of drunkenness.

Related: What is the Christian’s Delight?

Being falsely accused stings, no matter who you are. Our first desire might be to retaliate with anger. However, when Hannah replies to this man of the Lord, she is respectful. Eli responds to her words by asking that the Lord would answer her prayer.

The Lord does answer Hannah’s prayer, and she gives birth to a son. When he is weaned, she is faced with a choice. Does she keep her word, even though it costs her dearly? She shows great integrity as she keeps her promise and brings little Samuel to live with Eli at the tabernacle. She ends the fulfillment of her vow with a song of thanksgiving, one filled with prophetic language.

God rewards Hannah’s integrity with three sons and two daughters. She returns yearly to visit Samuel and sees him grow in favor with men and God, something every mother wants for her children.

Fessing up, being kind to those who hurt us, and keeping our word won’t always result in an immediate reward.  However, God sees when you show integrity, and I’m confident He will not forget it.

Integrity is “telling the truth even when it’s embarrassing.” 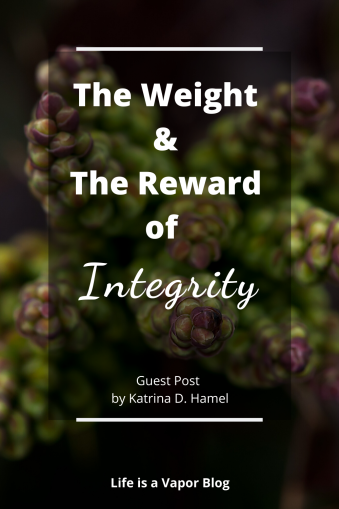 Katrina is a wife, mom of four, and an author of two Historical Christian Fiction books. When she’s not writing she’s playing board games, sipping iced coffee on the deck, or working on something creative. You can learn more about her books and blog on her website: katrinadhamel.com

♥ Are you a Christian Single?  Here’s a great – and safe – way to meet people!  Check out Christian Cafe!  You won’t regret it! ♥

4 thoughts on “The Weight & The Reward of Integrity”

Wife and mother. Follower of Christ. Lover of truth. Avid reader. Thoughtful writer. I chose the name "Life is a Vapor" because I am reminded all too often that we are pilgrims on this earth - just passing through. This is not home. So, instead of focusing on the earthly, I'd rather focus on the eternal. In light of this, it is my goal to make every blog post reflect this philosophy. View all posts by Summer