It’s a question so many of us are asking lately.  With all that’s going on in the world these days it makes us wonder if God is really in control.  Does he really know what He’s doing?

Does God really care that there’s a pandemic that is killing thousands all over the globe?  That senseless deaths, racism and riots are running amock in the nation?

How can God turn a blind eye to the extreme poverty and famine that is affecting so many people in Central America, Africa and Asia?  Do they matter to Him at all?

And one thing that has rocked me to the core is the growing human and sex trafficking industry that has invaded every continent on the earth.  Women, girls and even boys are being sold into slavery by the thousands to people who place absolutely no value on human life.

Terrorism, natural disasters, abortion and drug trafficking.  Corruption at every level of society and government.  Doesn’t God see that people’s lives are being destroyed every single day?  How can he just stand by and let it all happen?

What on earth is God doing, anyway?

Before we go any further, I think it’s important to note the following:

It’s easy to question God and get angry with him when we don’t understand his character.  Or to assume things about him that aren’t true.  We often do that to each other, don’t we?

I also think it’s worth noting that many of us only bring God into the conversation when things are going wrong or when disaster strikes.  Then we have someone to blame.  After all, a “good and loving God wouldn’t allow these things to happen”.

Perhaps God wants us to get to that point – when things are so confusing and utterly hopeless – so that we are forced to look up with closed fists and cry out, “Why is this happening?

Related: The God of His Word

“I form light and create darkness, I make well-being and create calamity, I am the Lord, who does all these things.”  Isaiah 45:7. ESV

One of God’s attributes is that He is sovereign, which means “that God is the supreme authority and all things are under His control” and as “Creator of heaven and earth has the absolute right and full authority to do or allow whatever He desires”. (Wikipedia)

Natural disasters are not beyond God’s control.  The Bible says,

“He makes clouds rise from the ends of the earth;
he sends lightning with the rain
and brings out the wind from his storehouses.” Psalm 135:7 NIV

If God controls the weather, he also decides when to allow flooding and mudslides during torrential rains and when to hold them back.  He alone wills earthquakes to happen.  In the Old Testament, we find that the earth quaked at the very presence of God, especially when He was angry. (2 Samuel 22:8, Psalm 18:7, Nahum 1:5).

And in the New Testament God sent an earthquake during the crucifixion of Christ and after his resurrection. (Matthew 27:54, Matthew 28:2). Jesus said that before he returned to the earth “there will be famines and earthquakes in various places. All these are the beginning of birth pains.” (Matthew 24:7, 8)

Man tries to play god in the creation and detention of weather, but he’ll never attain the greatness and power of Almighty God.  In man’s quest to harness the power of the elements of the earth, he fails to recognize that God put them there to begin with.

By God’s will pestilence in many forms has spread throughout the world in order to get man’s attention, and some respond while others continue to ignore Him.  It’s by the Lord’s great mercy that he doesn’t destroy the earth right now.  He’s giving man more time to realize his need for repentance. (2 Peter 3:9)

Related: Is God Angry with Sinners?

“Rend your heart and not your garments.  Return to the Lord your God, for he is gracious and compassionate, slow to anger and abounding in love, and he relents from sending calamity.” Joel 2:13 NIV

God was acting according to his character when he flooded the entire earth in the days of Noah.  He said to his servant, “I am going to put an end to all people, for the earth is filled with violence because of them. I am surely going to destroy both them and the earth.” (Genesis 6:13 NIV)

The earth had filled to overflowing with corruption and violence and the only one who loved God was Noah, which is why only he and his immediate family were saved.  It was because of God’s holiness that He decided to destroy the earth and all that lived in it.

And because God is love, he made this promise to Noah and to all creation, “Never again will I curse the ground because of humans, even though every inclination of the human heart is evil from childhood. And never again will I destroy all living creatures, as I have done. As long as the earth endures, seedtime and harvest, cold and heat, summer and winter, day and night will never cease.”  (Genesis 6:21, 22 NIV)

Can you sense the emotion in God’s words to Noah?  Did you catch it also in the passionate cry of Joel in the passage above?  God does not enjoy doing the harsh things he does, but he does them because sometimes it’s the only way he can get man’s attention.  His heart’s desire is that man would return to Him in brokenness and repentance and be saved from eternal damnation.

Related: What is the Christian’s Delight?

Let Your Anxiety be Replaced with Peace

If we don’t have the right perspective on national and global events our hearts will be full of anxiety and fear and our minds riddled with negative thoughts.  As Christians, we are called to a higher plane.

There are two ways we can achieve peace when we are anxious:

Prayer:  Hand all our anxieties over to God

“Do not be anxious about anything, but in every situation, by prayer and petition, with thanksgiving, present your requests to God. And the peace of God, which transcends all understanding, will guard your hearts and your minds in Christ Jesus.”  (Philippians 4:6-7 NIV)

Trust:  Rest in the promises of God

“So do not fear, for I am with you; do not be dismayed, for I am your God. I will strengthen you and help you; I will uphold you with my righteous right hand.” Isaiah 41:10

“Peace I leave with you; my peace I give you. I do not give to you as the world gives. Do not let your hearts be troubled and do not be afraid.” (John 14:27 NIV)

Related: Why Prayer is Vital to Christian Living

The Kingdom is Coming

Let’s not lose sight of our glorious future!  Remember, we are pilgrims on this earth, just passing through.  This home is temporary so let’s not hold on to it tightly.  What is to come is far beyond our wildest imagination, so much more than we’d ever hoped for.

There will be a new heaven and a new earth where “He will wipe every tear from their eyes. There will be no more death or mourning or crying or pain, for the old order of things has passed away.” (Revelation 21:4 NIV)

Before Jesus’ death, He promised this to his disciples and, by extension, to all believers: “My Father’s house has many rooms; if that were not so, would I have told you that I am going there to prepare a place for you?  And if I go and prepare a place for you, I will come back and take you to be with me that you also may be where I am.” (John 14:2, 3 NIV)

It’s only a matter of time, friend.  And we’re getting clues along the way.  Read about the signs of the end of this world in Matthew 24 where Jesus says that false christs and false prophets will deceive many.  We’re already hearing about deceivers in China that teach that Christ has already returned.

In Luke 17, Jesus says that just before his return the days will be like those of Noah and Lot before destruction came.  People will be living with no regard for morality, integrity or godliness and will be driven by their worldly passions.  This is the world we live in.

And in Luke 21, He talks about coming wars and persecution, and the destruction of Jerusalem.  There will be immense greed for power and riches.

Have you seen any of these things lately?  Then know that the return of Christ is near.

Related: Are you a Christian…or a Disciple?

The Task at Hand

So, what are we to do as those who wait and long for the return of Christ?  We are called to be watchful and prayerful, but we are not called to speculate. We are called to build the Kingdom by preaching the Gospel of Jesus Christ in word and deed and to proclaim what He did when he walked the earth, “Repent, for the kingdom of heaven is at hand”.

We are called to make disciples, to love the unlovely and to help the poor.  Instead of bickering and finger-pointing, we are called to encourage one another, “and all the more as we see the Day approaching”. (Hebrews 10:25 NIV)

And finally, what Paul says in Romans 13 is so important:

“And do this, understanding the present time: The hour has already come for you to wake up from your slumber, because our salvation is nearer now than when we first believed.

The night is nearly over; the day is almost here. So let us put aside the deeds of darkness and put on the armor of light.

Let us behave decently, as in the daytime, not in carousing and drunkenness, not in sexual immorality and debauchery, not in dissension and jealousy.

Rather, clothe yourselves with the Lord Jesus Christ, and do not think about how to gratify the desires of the flesh.” (verses 11-14 NIV)

Let’s not be settled in this world, for we weren’t made for it.  This world will perish, but we who are His will not perish with it.

To sum up what we’ve read here:

Be blessed.  Be a blessing! 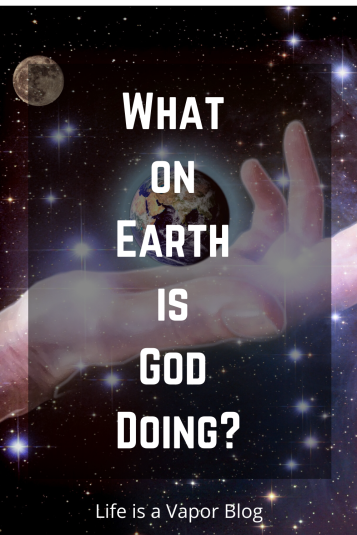 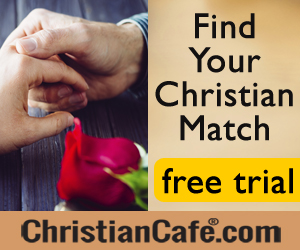 ♥ Are you a Christian Single?  Here’s a great – and safe – way to meet people!  Check out Christian Cafe!  You won’t regret it! ♥

42 thoughts on “What on Earth is God Doing?”

Wife and mother. Follower of Christ. Lover of truth. Avid reader. Thoughtful writer. I chose the name "Life is a Vapor" because I am reminded all too often that we are pilgrims on this earth - just passing through. This is not home. So, instead of focusing on the earthly, I'd rather focus on the eternal. In light of this, it is my goal to make every blog post reflect this philosophy. View all posts by Summer